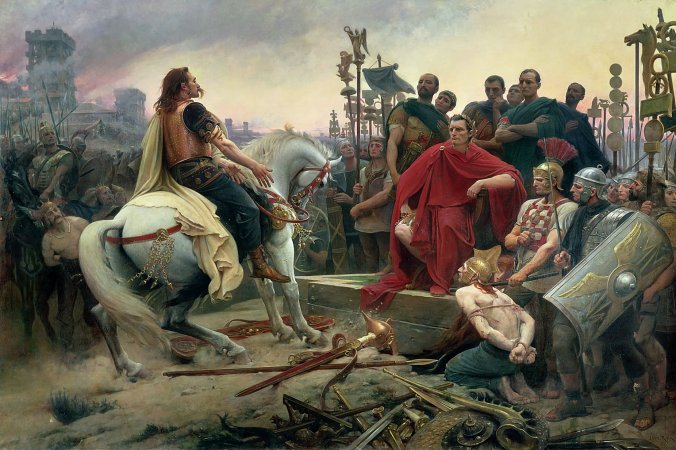 Vercingetorix throws down his arms at the feet of Julius Caesar, Lionel Royer (Public Domain via Wikimedia Commons)

Today, Vercingetorix is regarded as France’s first national hero.  The Celtic leader of Gaul brought together a number of Iron Age tribes to defend the land against the powerful Roman Army under the leadership of Julius Caesar.  Following a number of separate battles and skirmishes the two mighty leaders faced each other at the fortified settlement of Alesia.  The Romans had prepared deep fortified trenches and then settled in to await the Celts inside Alesia to run out of provisions.  On the 3rd of October 52BC, the Celts surrendered.  Vercingetorix put on his best armour and rode out to the Romans where he sat at Caesar’s feet ready to face his fate in Rome.  He died there around 46BC.

To discover more about a Mrs History session that explores the Iron Age, Celts and the Roman Empire contact us at www.mrshistory.org.uk.